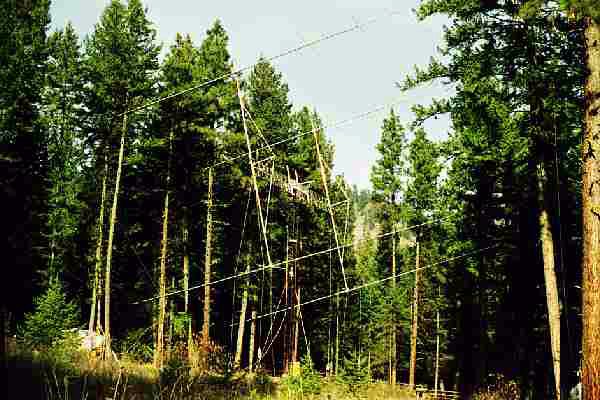 Yes, I undertook the HUGE process of building an array of four of the 50' long M-Squared 6M9KHW yagis - I highly recommend this array as a "realistically manageable" size, yet with enough gain to really get the job done effectively.  At the time of its raising (October 27, 2001), it was the third largest fully steerable ham radio antenna array for this frequency band in the world.  "Why is it so important to have a fully steerable antenna?", you might ask.

There are very few 6m DX stations with EME tracking capability, so it is ESSENTIAL (at this latitude anyway), to have elevation capability up to 65 degrees.  With my single yagi, I can only elevate to 45 degrees, which is really unfortunate because I was missing EU moonset under the best times of month (which in 2001 were coinciding with most northerly declination, putting the moonVERY HIGH here!).  The new GLEAP array is capable of elevation to around 70 degrees before the cross booms hit the motor mounted on the rear of the mast.

It is very desirable to have at least 1500W on 6m EME if you want to have any success.  Conditions on 6m can be VERY erratic - it is a terrible band for EME....however, it is the ONLY way to work any 6m DX from up here in the "geomagnetic far north".  I think if you put up an array such as four of the 6M9KHW yagis, you will have a killer system for working other kinds of propagation, too (if you happen to live in a place that HAS any other kind of propagation).  And, it should be possible to more easily work DX stations on their moonset with a 6m amplifier and a single good yagi.

Most of the folks who have tried 6m EME and given up due to lack of success and/or activity have had very little antenna gain, so have been severely limited by the number of  larger stations they could work. Note that even a four bay array of 5 or 6 element yagis only has the same amount of gain as my single 6M35WL/6M11JKV yagi, which I consider to be the minimum antenna size for 6m EME.  With my single yagi, I DO hear my own echoes  when I am pointed skyward (no ground gain) and the conditions are optimum (quiet background sky, moon near perigee, no auroral disturbances, etc.) but performance is quite erratic.  Just as on 2m EME, though, there is a "magic minimum point" in antenna gain where you can begin to have some reasonable success....and increasing the gain above that point dramatically increases the number of stations you will be able to contact.  The 4.5 dB additional gain from this four yagi array  greatly improves the reliability for EME QSO's with other smaller stations.

Having said all that about my array, I have to add now that very successful 6m EME results can now be obtained by using JT65A mode and a smaller array.  I truly believe that a very practical sized array for success using JT65A is an array of four 6M5X yagis.  This sized array is very simple to build and elevate, and has approximately the same gain as my single yagi, with which I hear my own echoes while pointing upward.  As long as it has 14 or 15 dBd gain, such a steerable array should have no trouble making contacts with larger 6m stations on CW, or with many stations on their horizon using JT65A.  I suggest constructing such an array using a "Double H frame" of aluminum tubing.  It could be very conveniently mounted on a 25' high tower.When this array was built, only JT44 mode (the early precursor to JT65A) was available.  JT65A has since become the worldwide standard for 6m EME contacts.

The array was designed to be able to provide a stacking distance of 31'' wide x 29.5' high, with the center of the array at 32' above ground level.  Here is the expected performance of the array: 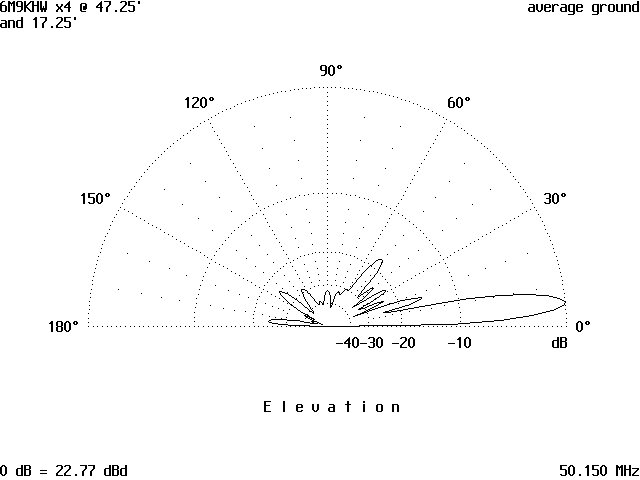 While pointed at the horizon, the new array appears to have more gain than the maximum ground gain lobe of the single 6M35WL/6M11JKV at 70', over the entire range of 2.5 to 9.5 degrees elevation.  Therefore, I expect it to be a very good performer when the moon is on the horizon, as well as for use on ground wave and during ionospheric openings.