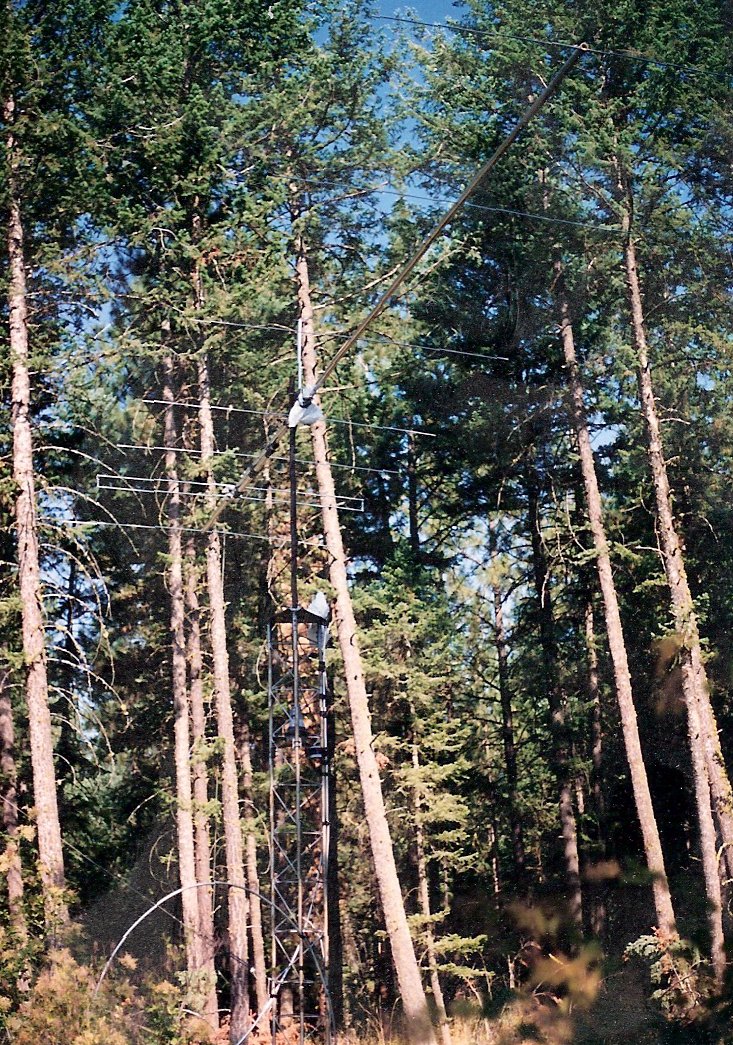 In the photo shown above, the 11 dBD antenna is mounted at 20' above ground, in 15' of Rohn 45 tower (which eventually was expanded to 65').  the antenna was fed with 3/4" CATV hardline, and as shown was successful in working SM7BAE and WA4NJP on 6m EME using CW. The main boom is 2" diameter aluminum irrigation tubing (.050" wall), vertically braced front and rear with 1/8" aircraft guy cable. The guy locations are were from the front of the mount to just ahead of the DE and just ahead of D4. Phyllistran 1200 nonconducting guy cable is used for side-to-side bracing from the center to the front and rear vertical guy locations of the antenna.  The antenna was used successfully for a year without the side-side bracing, but this was added as a precaution when it was put up the second time (to replace "Big Stealth", when it came apart due to wind damage).  The Phyllistran cable was held to the side from the center of the array with an 1"x8' fiberglass pole (4' on either side of the boom).

The antenna is mounted at the center of gravity, which is just in front of the second director.  PVC plugs (made for PVC plumbing pipe) are inserted in both the front and rear ends to close off the irrigation tubing. Each plug adds 1" to the length of the antenna.
1.5" PVC schedule 80 high pressure pipe was also used to provide additional strength to the boom where elements holes were drilled. 3" long pieces were inserted and centered at Reflector and D4-D5 locations, a 6" long piece was use at the D1 location, and an 18" long piece was used under the DE mounting clamps.  A 72" long piece was inserted in between elements D2 and D3 (and extending equally past the holes on either side), not just to provide extra strength where the elements are mounted, but to prevent collapse of the tubing where the 5 central U bolts hold it to the mounting channel.

The elements are 3/8" diameter 6061T6 aluminum tubing (.035" wall), mounted through the boom (insulated with nylon bushings manufactured for bed casters). The driven element is a folded dipole constructed of 1/2" diameter 6061T6 aluminum tubing (.058" wall), and was designed to provide a feed impedance of 75 ohms. The top and bottom of the folded dipole sections are spaced 4" apart (center-to-center), and shorted with 1/2" wide aluminum straps on the ends. The driven element sections are clamped to 1/2" thick HDPE plastic plates, which in turn are bolted above and below the boom using muffler clamp parts. To strengthen the driven element pieces where they were clamped to the plastic mounting plates, 12" long x 3/8" diameter reinforcing inserts were inserted into the middle of the top and bottom of the folded dipole elements (aluminum tubing in the continuous top section, and nylon in the split bottom section).

At the feed, 75 ohm hardline is directly attached (using stainless steel hardware, and completely potted in non-acetic acid silicone caulking) and immediately followed with a quarter wavelength decoupling sleeve insulated from the boom  (built using 2" irrigation tubing and PVC plumbing fittings for spacers). The antenna is fed with 185' of 75 ohm 3/4" CATV hardline (not including the section of hardline mounted on the boom, between the driven element and the flexible 10' piece of RG-11 around the mast to the top of the tower).

The boom-to-mast connection mount the first time was a simple aluminum plate U-bolts and muffler clamp saddles.  The second time it was put up, it was mounted on the "Big Stealth" elevation mount assembly.  In this mount, the antenna boom was mounted on a 3.5' long piece of 4" wide structural aluminum channel. This same aluminum channel was used to construct a "box" into which the piece with the antenna on it tightly fit inside. On the rear and bottom of this box, the channel holding the antenna was supported by a pivot assembly (which takes all the weight when the antenna is elevated). The pivoting shaft permits elevation of the antenna up to 50 degrees (and is shown in the photo at an angle of 45 degrees). The pivot assembly is a shaft of 1.5" IPS steel pipe inside a sleeve of 2" IPS schedule 80 steel pipe. This leaves a small space between the two pipes, which was shimmed with a single layer of thin teflon sheet, to serve as a bearing between them. A smaller piece of aluminum channel was clamped onto the pivoting sleeve. The 4" wide piece attached to the antenna boom fits over this shorter and upside-down pivoting section of channel, and the two mating channel sections (one fastened to the antenna boom and the other to the mount) are secured together with two hardened 7/16" through bolts.

Elevation indication is achieved through a weighted shaft on a potentiometer installed in the round film can mounted under the channel holding the boom. The potentiometer is part of a Wheatstone Bridge arrangement, which indicates elevation in the shack (thanks to G4ZHI for the circuit details) . Elevation was incorporated into the antenna for two reasons. The usable window for EME contacts with various stations overseas is greatly expanded by providing elevation for at least one station. Second, the local horizon, especially to the north, is impaired by a 3000' higher mountain ridge peaking 5 miles from the antenna; the effective horizon is 10-15 degrees toward the north, and does not drop down to zero until around 240 and 120 degrees azimuth. A surplus Luxor TVRO actuator easily provides the necessary mechanical force to raise the front of the boom to elevate the balanced antenna.